The Indian Air Force is unlikely to achieve its sanctioned strength of 42 fighter squadrons by the next decade even if all the planned acquisitions happen on time, Chief of the Air Staff Air Chief Marshal V R Chaudhari said here on Tuesday.

Even with the timely acquisition of four squadrons of Tejas MK-I; 5-6 squadrons of advanced medium combat aircraft – the home-grown fifth-generation fighter jet which is in the development phase – and six squadrons of medium multi-role fighter aircraft (the global tender for purchase is yet to be released), the IAF will have only around 35 squadrons of combat jets in the next decade.

“We would be around 35 fighter squadrons by the next decade in view of the phasing out of old aircraft and induction of new aircraft,” said Air Chief Marshal Chaudhari at a press conference ahead of the 89th Air Force Day.

The IAF will phase out its last four squadrons of MiG-21BIS in the next 3-4 years for which a drawdown plan has been made. The Jaguars, MiG-29s and Mirages would also be decommissioned by the end of the decade, beyond which the force was looking at 83 home-grown Tejas LCA Mark-I, which will start coming from 2024 and the ambitious AMCA to fill up the gap.

Asked about procurement 114 multi-role fighter aircraft, the Chief of the Air Staff said the service had received responses from global aviation majors on the Request for Information released for the mega-deal and awaited the government’s nod to take the proposal forward.

But even if the 114 fighter deal and the AMCA program materialise in time – and that’s a big if – India’s squadron strength will still be nowhere close to 42 squadrons despite the fact that the IAF prepares for a two-front war with Pakistan and China.

The force is in the process of buying 24 phased-out Mirages from France to harvest spare parts from such decommissioned planes to keep India’s own Mirage squadrons operational as finding out spares for the 35-year-old fleet remained a challenge after the manufacturer decided to shut the assembly line.

Air Marshal Chaudhari said the S400 air defence system would be inducted this year and the IAF would soon award contracts for developing swarm drones; but such advancement would not mean the force could cut down on its fighter strength.

The Taliban also advised individuals who did not have the legal authority to fly out...

Competitive bids from Indian companies were invited by the Ministry of Defence (MoD) through open...

Employing its engineering resources, the Indian Army has constructed a 30 km track on the...

Indulging in shocking anti-India PR, Facebook has taken down targeted networks in May 2020 due...

As the Taliban took control of Kabul, a delegation of the Afghan political leadership, including... 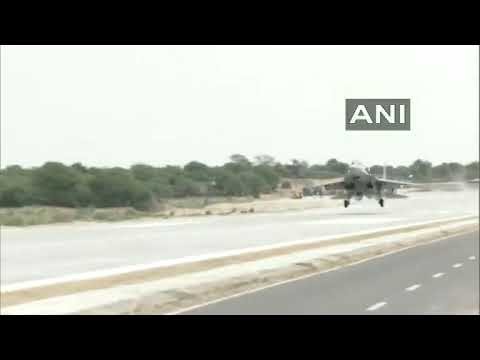 New Delhi: With Pakistan again becoming a frontline state in the “Great Game” with the...