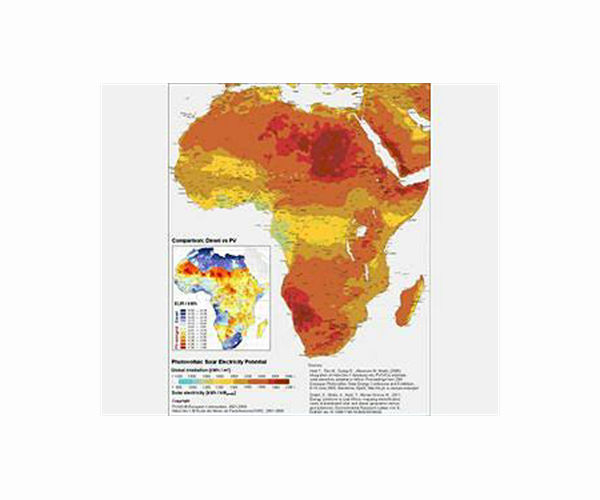 Blessed with year-round sunshine, North Africa has enormous potential for solar energy, but the huge investment and state subsidies required for large-scale projects are a challenge for cash-strapped regional governments.

The region boasts a few marquee projects that are among the largest in the world but renewable energy entrepreneurs say the focus should be at community level, helping whole villages to operate off the national grid and without using diesel fuel.

Egypt, the most populous Arab country, with more than 100 million people, has made solar power a priority in its quest to source 42 percent of its electricity from renewables by 2035.

In the western desert, about 40 kilometres (25 miles) north of the southern city of Aswan stands the Benban Solar Park. Visible from space, the $4 billion World Bank-funded project is the fourth largest solar park in the world, stretching over 37 square kilometres (14 square miles).

With six million solar panels, Benban was connected to Egypt’s national grid in 2019 and currently produces 930 gigawatt hours a year, which is enough to light up 420,000 households, according to the UN.

Egypt’s 42 percent target is an ambitious one. In 2016, just nine percent of its power needs came from renewable sources, according to official figures.

But experts say the state will need to provide incentives if it expects much help from consumers, few of whom have the means or space to switch to solar energy for their household needs.

“In Cairo, it’s a bit difficult to install solar panels because you need a lot of space on top of buildings plus it doesn’t cover all your electricity needs like powering an air conditioner during summer,” said Mohamed Abdel Raouf, an expert on green economies in the region.

He said tourist resorts on the Red Sea and Mediterranean coasts as well as rural centres offered more fertile ground.

“The state needs to incentivise it for the average consumer because it would cost me around 60,000 pounds ($3,800) to switch over to solar energy for my home in urban Cairo,” he said.

“Why would I invest in environmentally friendly technology that’s expensive? The state really needs to take the lead in making it attractive.”

The International Energy Agency said over the past decade North Africa has managed to increase its renewable energy production by 40 percent. But that does not mean that addiction to fossil fuels has waned.

In oil-rich Algeria, which receives around 3,600 hours of sun per year, renewable energy only represents a paltry 1.8 percent of the country’s consumption.

In Morocco, the gaps in its green strategy are embodied by the gigantic Noor Ouarzazate solar complex — the world’s largest multi-technology solar installation.

At the gateway to the Sahara, the enormous complex has four power plants with an installed capacity of 530 megawatts.

“From the start, it was clear that the strategy was unbalanced. The strategic error was to want to invest in monstrous projects that are difficult to finance,” Said Guemra, a specialist in energy management, told AFP.

Rabat sells its green energy at a loss with the generating costs double the price it is sold at to the national grid.

Concentrated solar power (CSP) stations produce energy costing between 1.6 and 1.4 dirhams (18 cents to 16 cents) per kilowatt hour, which is sold to the National Electricity Office (ONEE) at 0.8 dirhams.

The strategy has not paid off and the privately-owned, publicly-funded Moroccan Agency for Sustainable Energy (Masen), which runs the Noor complex, is more than $100 million in debt.

The CEO of Cairo-based start-up Karm Solar, Ahmed Zahran, says it is time to move away from the model of selling electricity to the state in a private public partnership like Benban.

“The business model… is pretty abusive and… not comprehensive. Companies are focusing on selling electricity to one offtaker (the state) and they’re not interested in participating in the infrastructure of the countries they’re operating in,” Zahran told AFP.

“So they’re always viewed as opportunistic investors, who are trying to get specific contracts in place, preferably with the government and that’s it.”

It was the first private solar company to obtain a power distribution licence in Egypt.

“We realised that our future is not in being a solar developer but in being a utility-scale solar firm… We’re working on the entire infrastructure from building the power plant, building the distribution network, we’re doing the tower management, the power mix, everything,” Zahran said.

His firm says it has saved 2.3 million litres (608,000 gallons) of diesel and offset 10,000 tonnes of carbon dioxide annually in the process of installing solar plant projects with over 71 MW capacity.

All About Solar Energy at SolarDaily.com


A consortium led by the University of Surrey has been awarded close to Pounds 3 million to help design perovskite solar cells to power wearable technologies and Internet of Things (IoT) devices.

Crystalline silicon solar cells have dominated the solar market for many years, but they cannot power the rapidly growing portable electronics market, particularly that of wearables and IoT devices which are expected to reach trillions of units in the next few years.

There are already over 20 billio … read more

As electric car sales take off and petrol engines face being phased out by 2035,...

The Beyond Earth Institute (BEI) unveiled “Catching the Sun: A National Strategy for Space Solar...

They have improved a process for vertically depositing a solution made from an inexpensive perovskite...

Pea sized stones heated to 600?C in large, insulated steel tanks are at the heart...

Perovskite solar cells have gained attention in recent years because of their ability to deliver...

A considerable portion of the efforts to realize a sustainable world has gone into developing...

A team of researchers led by Aarhus University and including experts from universities and knowledge...

Losses occur in all solar cells. One cause is the recombination of charge carriers at...