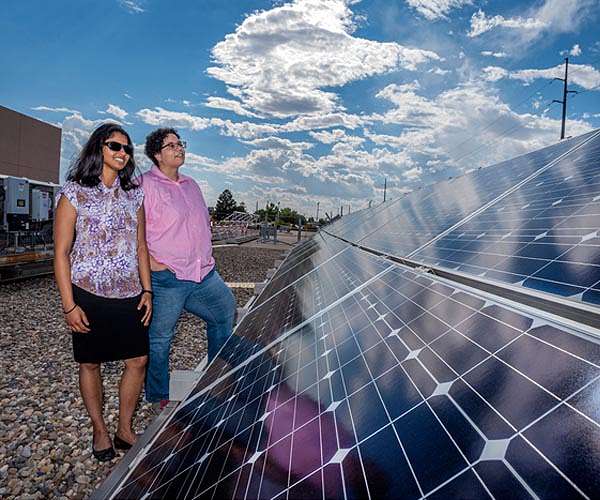 Hurricanes, blizzards, hailstorms and wildfires all pose risks to solar farms both directly in the form of costly damage and indirectly in the form of blocked sunlight and reduced electricity output. Two Sandia researchers scoured maintenance tickets from more than 800 solar farms in 24 states and combined that information with electricity generation data and weather records to assess the effects of severe weather on the facilities. By identifying the factors that contribute to low performance, they hope to increase the resiliency of solar farms to extreme weather.

“Trying to understand how future climate conditions could impact our national energy infrastructure, is exactly what we need to be doing if we want our renewable energy sector to be resilient under a changing climate,” said Thushara Gunda, the senior researcher on the project. “Right now, we’re focused on extreme weather events, but eventually we’ll extend into chronic exposure events like consistent extreme heat.”

Hurricanes and snow and storms, oh my!

The Sandia research team first used natural-language processing, a type of machine learning used by smart assistants, to analyze six years of solar maintenance records for key weather-related words. The analysis methods they used for this study has since been published and is freely available for other photovoltaic researchers and operators.

While hailstorms tend to be very costly, they did not appear in solar farm maintenance records, likely because operators tend to document hail damage in the form of insurance claims, Gunda said. Instead, she found that hurricanes were mentioned in almost 15% of weather-related maintenance records, followed by the other weather terms, such as snow, storm, lightning and wind.

“Some hurricanes damage racking – the structure that holds up the panels – due to the high winds,” said Nicole Jackson, the lead author on the paper. “The other major issue we’ve seen from the maintenance records and talking with our industry partners is flooding blocking access to the site, which delays the process of turning the plant back on.”

Using machine learning to find the most important factors

Then they used a machine learning algorithm to uncover the hidden factors that contributed to low performance from these severe weather events.

She found that across the board, older solar farms were affected the most by severe weather. One possibility for this is that solar farms that had been in operation for more than five years had more wear-and-tear from being exposed to the elements longer, Jackson said.

Gunda agreed, adding, “This work highlights the importance of ongoing maintenance and further research to ensure photovoltaic plants continue to operate as intended.”

For snowstorms, which unexpectedly were the type of storm with the highest effect on electricity production, the next most important variables were low sunlight levels at the location due to cloud cover and the amount of snow, followed by several geographical features of the farm.

For hurricanes – principally hurricanes Florence and Michael – the amount of rainfall and the timing of the nearest hurricane had the next highest effect on production after age. Surprisingly low wind speeds were significant. This is likely because when high wind speeds are predicted, solar farms are preemptively shut down so that the employees can evacuate leading to no production, Gunda said.

Expanding the approach to wildfires, the grid

As an impartial research institution in this space, Sandia was able to collaborate with multiple industry partners to make this work feasible. “We would not have been able to do this project without those partnerships,” Gunda said.

The research team is working to extend the project to study the effect of wildfires on solar farms. Since wildfires aren’t mentioned in maintenance logs, they were not able to study them for this paper. Operators don’t stop to write a maintenance report when their solar farm is being threatened by a wildfire, Gunda said. “This work highlights the reality of some of the data limitations we have to grapple with when studying extreme weather events.”

“The cool thing about this work is that we were able to develop a comprehensive approach of integrating and analyzing performance data, operations data and weather data,” Jackson said. “We’re extending the approach into wildfires to examine their performance impacts on solar energy generation in greater detail.”

The researchers are currently expanding this work to look at the effects of severe weather on the entire electrical grid, add in more production data, and answer even more questions to help the grid adapt to the changing climate and evolving technologies.

All About Solar Energy at SolarDaily.com


A consortium led by the University of Surrey has been awarded close to Pounds 3 million to help design perovskite solar cells to power wearable technologies and Internet of Things (IoT) devices.

Crystalline silicon solar cells have dominated the solar market for many years, but they cannot power the rapidly growing portable electronics market, particularly that of wearables and IoT devices which are expected to reach trillions of units in the next few years.

There are already over 20 billio … read more

Throughout the history of the West, human actions have often rushed the desert – and...

People in Germany and Ireland are more willing to accept renewable energy sites closer to...

When its batteries are fully charged, an electronic device will normally indicate that they are...

Researchers have developed and demonstrated a new system that can detect defects in silicon solar...