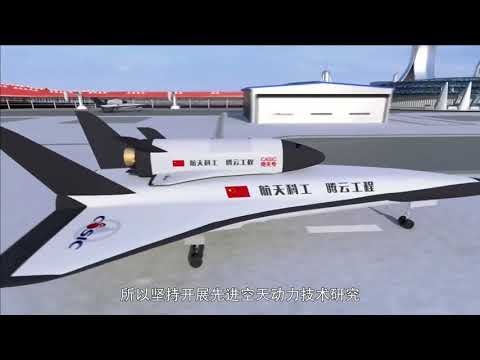 Zhuhai Air Show, which is also known as Air Show China, is the largest
exhibition of military and civil aviation in the People’s Republic of China.
This year, it was ripe with new developments and concepts from the country’s
aviation industry. Here are some of AeroTime’s picks for the weirdest, most
interesting, or simply ‘out there’ ideas.

Between the Kratos XQ-58 Valkyrie, the Boeing ATS and the entire Skyborg
project, cheap, stealthy and high-performance combat drones which could
accompany manned fighter jets into battle seem like the hot new thing. Indeed,
the concept of ‘loyal wingmen’ is on its way to revolutionize aerial warfare,
which is why major air powers have been investing in it heavily.

For a long time, there was no concrete information about China’s take on this
formula. Was the country’s defence industry developing something? At Air Show
China 2021, we found out the truth – yes, the global superpower had been hard
at work.

Unsurprisingly, the FH-97, displayed by the China Aerospace Science and
Technology Corporation (CASC), bears more than a passing resemblance to the
XQ-58, which flew for the first time in 2019 and performed weapons tests in
April 2021. It is too early to judge the seriousness of the FH-97 project, and
when we are going to see it fly. However, a host of combat drone projects –
some small, some big and some quite unconventional – were presented at CASC’s
stand. This shows that the company is certainly taking the field seriously and
has invested a lot of money into research.

The FC-31 And Its Many Faces

The Shenyang FC-31 Gyrfalcon had its first flight back in 2012. That was less
than two years after the maiden flight of the J-20, and the West was quite
surprised with China’s ability to design and test-fly a second stealth fighter
in such a short time. The aircraft was rumoured to become the next addition to
the inventory of the People’s Liberation Army Air Force (PLAF). But then it
disappeared.

Throughout the year, bits and pieces of information have appeared in Chinese
media, but nothing concrete. There has been some speculation that the jet was
being prepared for export and that it might become a carrier-capable jet for
the Chinese navy. But, until Zhuhai 2021, both facts had remained unconfirmed.

Several mock-ups of the FC-31’s new and updated look were presented at the Air
Show, including one of the jet’s cockpit. Additionally, the jet’s chief
designer revealed that a new Chinese carrier-based jet is set to be rolled out
later this year. The name of the new jet was not revealed, but a model and a
render were displayed – both rather reminiscent of the Gyrfalcon. So, it’s
possible that the FC-31 will be heavily modified before taking on carrier
duty, and may even receive a new name.

In the end, it is quite likely that the FC-31 will include both land-based and
carrier-based versions, be adopted by the Chinese Air Force, and be offered
for export. Quite an assortment of roles.

Between performances from the FC-31 and the re-engined J-20, China appeared to
be placing quite a bit of emphasis on its fifth-generation capability.

But the rest of the world seems to be fixated on the generation above. Between
the United States’ NGAD, Europe’s FCAS and Tempest, and Japan’s F-X, the
world’s major aerospace manufacturers are investing a lot into the development
of sixth-generation fighter jets.

Recently, Russia has dropped some hints about its plans for a sixth-gen
development timeline. China followed. At Zhuhai, several renders of aircraft appeared to mimic western designs of
prospective jets. While none had any concrete numbers in regards to
performance or timelines, it is clear that China is also working out what the
next generation could look like as well.

One render, seen in a presentation at the Aviation Industry Corporation of
China’s (AVIC) stand, appeared to be almost identical to Boeing’s proposal for
the F/A-XX from the early 2010s. Another, shown separately, was a different
design with 2D vectoring engine nozzles and stubby wings.

As if the sixth generation was not enough, an even more futuristic project was
presented by AVIC. The PLAN Next Generation Carrier Aircraft features a
forward-swept foldable wing, foldable tail, canards and massive internal bays.

Some material referred to the jet as the J-25, while a partial mock-up of the
aircraft (displayed on the outskirts of an exhibition hall in a dramatic
industrial diorama) was labelled ‘Kalavinka’, referring to a mythical bird
with a human head from Asian folklore.

In contrast to the sixth-generation projects, AVIC provided data this time.
The jet is supposed to have a top speed of Mach 4, a cruise speed of Mach 3
and a combat radius of 2,000 kilometers (1,080 nautical miles). Additionally,
it should be powered by engines with 180 kN of thrust with afterburner
enabled.

However, there are some problems with this arrangement. Not only was the
aircraft depicted as having diverterless supersonic inlets that, generally, do
not work beyond Mach 2. The forward-swept wing is also understood to have a
limiting performance on the maximum speed. This would require unfathomable
advancements in materials for it to sustain Mach 4, which suggests that the
images and mock-ups provided were barely anything more than a design proposal.

If next-generation fighter jets are China’s bold step towards science fiction,
then its spaceplanes can be considered a full commitment to the genre. China
Aerospace Science and Industry Corporation (CASIC), one of the major Chinese
spacecraft manufacturers, presented its own vision of how a spaceplane of the
future should look.

Essentially, its first stage is an assortment of engines mounted on an
arrow-like fuselage, and the second is highly reminiscent of the Space
Shuttle. Called Tengyun, the system was first announced back in 2018. But this
year, it was followed by a lavish presentation that included a render, a short
video and an announcement of a planned propulsion system. Supposedly, the
first stage of the Tengyun will take a page out of the SR-71’s book and
feature a combined turbojet-ramjet engine – a feat that has never been
accomplished on a launcher vehicle before.

A lightweight helicopter weighing 4kg has been developed by the researchers of the Indian Institute...

Ever since the Taliban takeover of Afghanistan, evidence on ground shows the level of violence...

A stronger convergence in India-US partnership will have to be built in order to manoeuvre...

The Hawker Siddeley HS 748 or Avro is a medium-sized turboprop airliner originally designed and...

Port Louis : India on Monday handed over Dornier aircraft to Mauritius as part of...

The Defence Research and Development Organisation (DRDO) has developed an anti-drone system to neutralize enemy...

The issue will further complicate the quest for new equilibrium in India-China ties EXPANSION: Chinese...