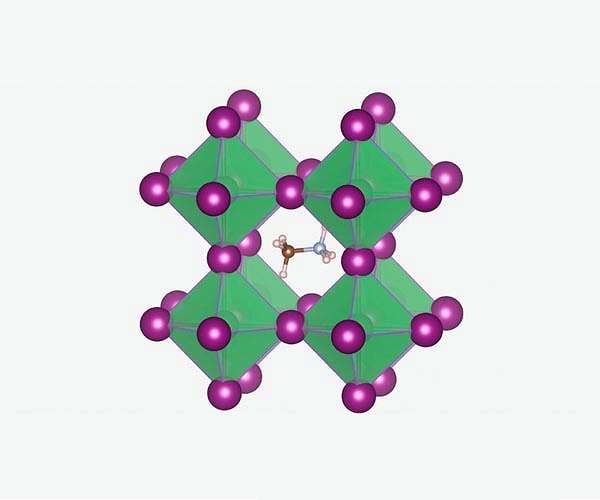 Perovskite is one of the most widely studied materials because of its many potential applications. A particularly promising field is photovoltaics, which involves devices that efficiently convert light into electricity. The conversion efficiency of hybrid perovskite is now around 25.2%, surpassing that of commercial silicon-based solar cells.

Focusing precisely on methylammonium lead iodide, a study conducted at Sao Paulo State University’s Department of Physics and Chemistry (DFQ-UNESP) in Ilha Solteira, Brazil, has advanced scientists’ understanding of the ferroelectric nature of perovskite and the origin of its outstanding photovoltaic properties. An article reporting the findings is published in Acta Materialia.

The study was part of the PhD research of Fernando Brondani Minussi, supervised by Eudes Borges de Araujo, a professor at UNESP. It was supported by Sao Paulo Research Foundation – FAPESP via the Thematic Project “Multiferroic and ferroelectric materials for energy converters: synthesis, properties, phenomenology and applications”, for which the principal investigator is Jose Antonio Eiras, a professor at the Federal University of Sao Carlos (UFSCar), also in Sao Paulo state. Araujo is a co-principal investigator for the project.

“In this study, we systematically investigated the effect of temperature and a direct-current electric field on the electrical, dielectric and spectroscopic properties of methylammonium lead iodide. We strove to exclude other interferences in order to demonstrate the signature that’s characteristic of the ferroelectric relaxor in the perovskite studied,” Araujo said.

Ferroelectric relaxors are materials whose structure is substantially modified in the presence of an electric field owing to the displacement of ions in the crystal lattice. Positive and negative ions move in opposite directions. They are highly efficient at storing and converting energy because their dielectric constants far surpass those of ordinary ferroelectrics.

“Our findings indicate the nature of the methylammonium lead iodide ferroelectric relaxor, but they also show the existence of a freezing temperature of the dipoles responsible for the relaxor character of the material and a diffuse phase transition at high temperatures. This critical temperature, which affects the relaxor property, is 270 K [-3.15 C], not far below the freezing point of water,” Araujo said.

Analysis of the results enabled the researchers to propose a novel phase diagram for the system comprising lead iodide and methylammonium, in which they indicate regions that delimit the existence of three distinct phases: ferroelectric, ergodic, and non-ergodic.

“Ferroelectrics naturally exhibit spontaneous electric polarization, which can be reversed by applying an external electric field. This ferroelectric order is destroyed at high temperatures, and the material becomes non-polarized by transforming into a paraelectric phase,” Araujo said.

“Classic relaxors exhibit a paraelectric phase at high temperatures, similar in many ways to the paraelectric phase of a normal ferroelectric. When cooled below a certain level known as the ‘Burns temperature’, they start to present polar nanoregions with randomly distributed dipole moments. Because these regions are highly dynamic and not correlated, we say that the relaxor behaves ergodically. The polar nanoregions interact and freeze below a certain temperature, characterizing a non-ergodic state. However, a ferroelectric state can be induced in a non-ergodic relaxor by applying a sufficiently strong electric field.”

In mathematics, the term ergodicity refers to the idea that the average behavior of a system can be deduced from the trajectory of a typical point, but in this case it has a different meaning, according to Araujo, who stressed that although it does not exhibit the behavior expected of a classical relaxor, the relaxor property of methylammonium lead iodide must be intrinsic, and may be eclipsed by ion conductivity and the semiconductive characteristics of the material.

“Generally speaking, ferroelectric relaxors have high levels of dielectric permissivity, and excellent electrocaloric and electromechanical properties. Hysteresis – the tendency for the system to conserve its properties – is suppressed only at sufficiently high temperatures. From the technological standpoint, these characteristics make them strong candidates for the production of acoustic sensors, solid-state coolers, transducers, and actuators. From the scientific standpoint, the fact that ferroelectric relaxors are still the least understood materials in condensed matter physics is a major research stimulus,” Araujo said.

The original and genuinely significant results of the study could potentially help to bring about a paradigm shift in the understanding of ferroelectricity and the origins of the exceptional photovoltaic properties of halide perovskites. “I believe the study substantially advances our understanding of the physics of this complex and fascinating system,” he said.

Plans were announced this week for two new electric car battery plants in France and...

Astronauts Thomas Pesquet of France and Shane Kimbrough of the United States spacewalked outside the...

For the first time, researchers have discovered a way to obtain polarity and photovoltaic behavior...

More than 73 million households in remote areas of the world get electricity not from...

A compound used widely in candles offers promise for a much more modern energy challenge...

The number of solar panels within shortest distance from a house is the most important...