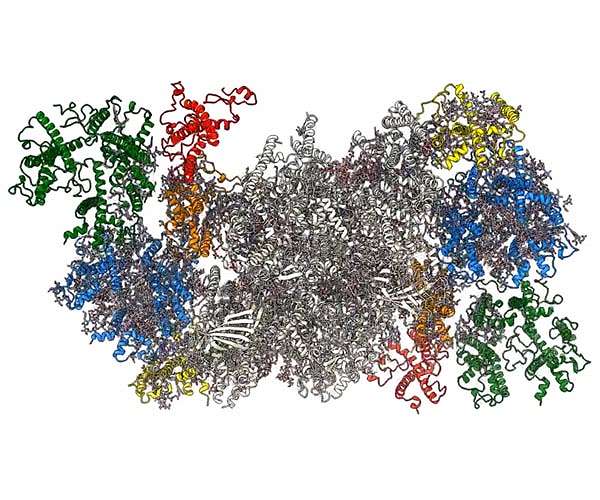 For the first time, Umea researchers have, with the help of cryogenic electron microscopy, succeeded in producing a high-resolution image of photosystem II – the central complex of photosynthesis – of the model plant Arabidopsis. The enormous complex is responsible for the vital oxygen production in photosynthesis that once made life possible on our planet. The study is published in Scientific Reports.

“The structure gives us detailed information about the various cofactors such as chlorophyll and the lipid molecules in photosystem II. We have also managed to show exactly where and how detergents bind and affect the stability of the complex,” says Wolfgang Schroder, professor at the Department of Chemistry at Umea University Sweden, who led the study.

The plant researchers’ “experimental rat” has for the past 25 years been the plant thale cress/mouse-ear cress Arabidopsis thaliana. The reason for this is that this “weed” grows rapidly even at our northern latitudes in Sweden and in 2000, researchers succeeded in sequencing all its genes.

At the heart of the photosynthetic process is the Photosystem II complex. It contains almost 30 different proteins and a number of cofactors such as different pigments and metals and it is without any doubt one of the largest complexes in plant chloroplasts. The now published structure from this study has the same high-resolution as the two previous structures obtained from spinach and pea, which for the first time enables a comparison of plants’ photosystem II complex with the same level of detail.

“I have worked with this complex since I became a PhD student in plant protein chemistry at Lund University in 1983,” says Wolfgang Schroder. “I remember that as a doctoral student I joked at the coffee break “think if you could dive into photosystem II and look around”. Today with new technology and my extremely talented doctoral student Andre Graca and my two fantastic research colleagues Michael Hall and Karina Persson, we have now been able to do this.”

The technology that the researchers have used is called cryogenic electron microscopy (Nobel Prize in Chemistry 2017) and it briefly means that biological samples are shot down into liquid ethane (-190 degrees Celsius). Nearly 100,000 two-dimensional EM particle images from random orientations are selected. Using several computational resources, the collection of 2D images can then be used to reconstruct a three-dimensional structure.

“Additionally, it was extremely exciting to see if our previous biochemical analyzes of the complex were correct. Usually, the privilege of publishing structures with this size and resolution is only possible to larger research teams from different laboratories, as it requires a lot of data, time and effort. In our case we are four Umea researchers within the network Integrated Structural Biology, ISB, who created this structure so it is “locally” produced research,” says Wolfgang Schroder with a smile.

Northrop Grumman has been awarded a contract by Airbus Defence and Space for the design,...

Researchers from the Okinawa Institute of Science and Technology Graduate University (OIST) have created perovskite...

Land productivity could be greatly increased by combining sheep grazing and solar energy production on...

Scientists have demonstrated that modifying the topmost layer of atoms on the surface of electrodes...

With the recent development of foldable mobile phone screens, research on foldable electronics has never...

How can I prepare myself for something I do not yet know? Scientists from the...

The inclusion of a special new perovskite layer has enabled scientists to create a “spin-polarized...